It’s been dubbed a ‘gastric band in a glass‘ – but the latest weight loss food sweeping the showbiz world is far from appetizing.

The Amorphophallus konjac – or Devil’s Tongue – has been hailed as the new wonder ingredient for dieters thanks to its slimming properties.

But slimmers beware – its distinctive odor has been compared to rotting flesh, leading to it being labelled ‘the worst-smelling plant on earth‘.

Thanks to its high-fibre content, the plant is now cropping up in a range of weight loss products beloved by the likes of reality starlets Holly Hagan and Chloe Sims.

Geordie Shore’s Holly dropped four dress sizes from a 16 to a eight and claims her transformation is partly down to Skinny Sprinkles, a weight loss supplement which boasts the plant as one of its ingredients and can be added to water before a meal.

Its active ingredient glucomannan, which comes from the fiber-dense root of Devil’s Tongue, has been clinically proven to weight loss by absorbing up to 50 times its weight in water. 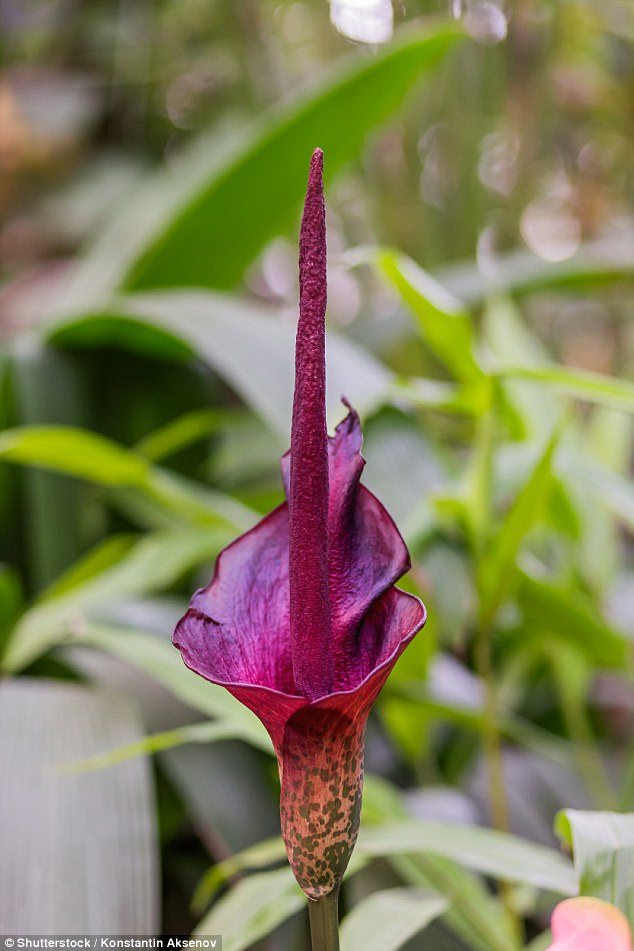 By expanding in the stomach and helping you feel full for longer, it works much like a gastric band.

Glucomannan is also being added to an increasing number of protein powders and weight loss pills.

Despite nutritionists warning it should only be used as part of a calorie-controlled diet, the ingredient has  been recognized and approved as a safe supplement to aid weight loss by the European Food Safety Authority (EFSA).

The flower, which can grown up to 2 ft, owes its unusual name to its long red stigma and has been used in traditional Chinese medicine for years as well as in cooking.

The distinctive plant is also said to have medicinal properties to help reduce blood sugar levels.

Also known as a ‘voodoo lily‘, the foul-smelling plant is native to east Asia and was successfully grown outdoors in Britain for the first time in 2010.