Reducing your meat consumption is good for the planet, but a new study has confirmed that going veggie can work wonders for your personal health too.

Following a vegetarian diet is twice as effective than a carnivorous one when it comes to losing weight, researchers from the Physicians Committee for Responsible Medicine in Washington DC found.

According to lead author, Dr. Hana Kahleová, this finding is particularly important for people with metabolic syndrome and type 2 diabetes.

To reach their conclusions, researchers studied 74 people with type 2 diabetes – they were randomly assigned either a vegetarian diet or a typical anti-diabetic diet, which followed the official recommendations of the European Association for the Study of Diabetes (EASD).

What’s more, the vegetarian diet was practically vegan, as it consisted of fruits, vegetables, nuts, seeds, grains and legumes, with animal products limited to one portion of low-fat yoghurt a day. 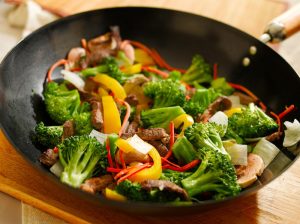 In order to assess weight loss potential, all participants had their diets restricted to 500 calorie diet less than they would need to maintain their weight.

After six months, those following the vegetarian diet had lost an average of 6.2kg, compared to 3.2kg for those on the conventional diet.

It was a small sample size, but heavily suggests going veggie could make you lose twice as much weight.

Both diets were found to cause a similar reduction in subcutaneous fat (under the skin). Subfascial fat (on the surface of the muscles) was only reduced on the vegetarian diet though, and intramuscular fat (inside muscles) was reduced a lot more too.

Dr. Kahleová said: “Vegetarian diets proved to be the most effective diets for weight loss. However, we also showed that a vegetarian diet is much more effective at reducing muscle fat, thus improving metabolism.

“This finding is important for people who are trying to lose weight, including those suffering from metabolic syndrome and/or type 2 diabetes. But it is also relevant to anyone who takes their weight management seriously and wants to stay lean and healthy.”